A TIME FOR THE LIGHT OF CHRIST


We are experiencing a change in lifestyle that nobody could even have predicted. Now the challenge for most of us it's staying at home and not wondering very far, at least for a majority of us. There are many essential agencies to take care of our basic needs like those to keep the food service chains moving, financial institutions to provide for economic flow, and those health Institutions and workers that are in harm's way of this virus. We are grateful for their service.

Our lifestyle is disrupted because of the fear of getting the virus that carries a terrible reputation. Yes, we are being challenged in every way, and this is the time for the Light of Christ to shine on our paths. We do indeed need His direction in this period of uncertainty and confusion. You will be surprised how the understanding of physical light we use to see resembles the spiritual light of Christ.

The light was created with our Creator's first words in Genesis 1:3, "Then God said, 'Let there be light'; and there was light" God created the natural light that we observe to see His created things. This light source is God's word, not the Sun. Remember, He is our light as we will one day witness as the book of Revelation prophesied in verse 22:5, "There shall be no night there: They need no lamp nor light of the Sun, for the Lord God gives them light. And they shall reign forever and ever."

It is God who is the author of the physical light that gave us the ability to see. You might be surprised by how this works. The reason why you can see things is that the light waves are actually coming from the object you see. You cannot see energy because it is invisible. 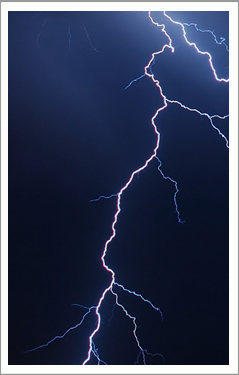 For example, you cannot see energy like electricity, but you can see the effects when an electrical bolt is generated from the ground to a cloud in the form of a lightning strike. What you see is the after-effects when air is heated up explosively, producing a loud sound with a blast of light. Energy, including light, is invisible and is only revealed with its effects.

How do we see things if the light is invisible? It is just like electricity that we see the effects. When a light energy wave from the Sun or the artificial light you have in your home interacts with the object, it energizes it. In an instant, the energized object sends a light wave to our eye's retina that we can visualize. The source of our vision is not only the light but how it interacts with the objects in the cosmos.

God demonstrates His glory to us with the light he created in the first spoken word in Genesis 1:3, "Let there be light." We would see the effects of His light throughout all of His Creation. It interesting to note that the created things would interact and become energized by the physical light of our Creator. He is manifesting Himself through the created things, so it is clear and understandable to us that He is here for us as it says, Romans 1:20 "For since the creation of the world His invisible attributes are clearly seen, being understood by the things that are made, even His eternal power and Godhead, so that they are without excuse."

Science in the early 1900s gave us a better idea of how matter interacts with light so that we see. All the things we see are made of tiny particles called atoms. Located outside the atom are even smaller particles called electrons. When these electrons interact with light's waves of energy, they become energized and release photons of light that our eyes can recognize in the form of an object's size, shape, depth, and color that give us perception to identify what we see.

Einstein gave us the idea of a photon. He produced a theory that stated a photon behaves like a particle that had a measured value. A photon has a function to transmit light into space with a theoretical mass at rest of zero but is always moving at the speed of light. He developed a theory that made us think of light energy very differently. It was a particle too. 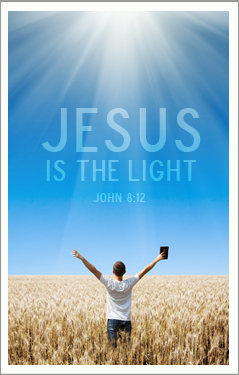 This dualistic nature of light being an energy wave and a particle at the same time is difficult for us to understand but experimentally and mathematically it works. It's difficult for us to understand the dualistic nature of Jesus Christ, where God takes on human form. After all, it was Jesus Christ that said He was the Light of the World in His ministry on earth.

"Then Jesus spoke to them again, saying, 'I am the light of the world. He who follows Me shall not walk in darkness, but have the light of life.'" John 8:12

If there is no light of Christ, there will be darkness. And if the creation is void of created things, we could not see our living Creator. He gave us a world to see Him in all His glory. We need to remind ourselves when the Sun first appears in the skies to provide us with light; we have the eternal light that gives us hope.

We pray that you will stay safe and have trust in the One that defeated death and resurrected the body to a new light. We also pray that our feelings of uncertainty during this time of darkness will see the light of Christ pierce through the skies and warm your hearts with the peace of Christ forever.