Do you think Spiderman’s ability to toss a web in a flash is impressive? Well, check out this spider from the Peruvian Amazon who can slingshot its web at a faster acceleration than a cheetah. A high-speed camera recorded its speed at 3,600 feet per second squared while a cheetah launches from rest at only 42 feet per second squared. A biophysicist from Georgia Tech, Symonne Alexendar, reported this on March 4, 2019, at the meeting of the American Physical Society.

A spider's slingshot method of flinging its web is highly efficient for capturing flying insects.This tiny little spider only measures 0.1 inch, which is equal to 3 millimeters, the size of a little fire ant, and belongs to the Theridiomatidae family. When this teeny spider senses a potential meal, it launches its web with lightning speed and entangles its prey into a sticky silk web. This amazing spider is part of the arachnid family that has eight legs, unlike insects, and don’t have antennae. Spiders don’t have a great reputation because of their scary appearance, and most people would not put them in the category of “cute.” It doesn’t help that they also have poisonous curved fangs that most of these creatures use to kill its prey. Spiders carry a toxic venom in small quantities. For the most part, this venom does not harm humans.

There are 3,000 different species of spiders in North America, and only two are considered dangerous. The black widow’s neuron toxins, for example, are 15 times more dangerous than a rattlesnake, but because of the tiny amount injected with a bite of this spider, its rarely fatal to humans. Another menacing arachnid that may go unnoticed is the brown recluse spider or violin spider because of its violin-shaped marking on its back. In the daytime hours, this spider, the size of a quarter, tends to hide in secluded areas like clothing or under leaves and branches. It is not aggressive but only reacts to humans with a nasty bite when it feels threatened. They have small fangs and can’t bite through clothing. When humans do get bit, they can’t feel it at first, but in 3 to 8 hours on the site where the venom enters the skin, it becomes red, swollen, and tender to the touch. Most bites heal in 3 weeks, but there are cases where the skin becomes a necrotic lesion that can leave a deep scar, taking months to heal.

There is a very good chance that you will not get bit by one of these two spiders out of the 3,000 species found in North America. Don’t let their looks and reputation get in the way of this creature's amazing ability to produce webs made of silk to capture their prey. One of the most awesome design processes is the ability to produce a silk web on demand. In an instant, with the acceleration of 86 times faster than a cheetah, the Amazon slingshot spider will need silk to be there to engulf its prey. 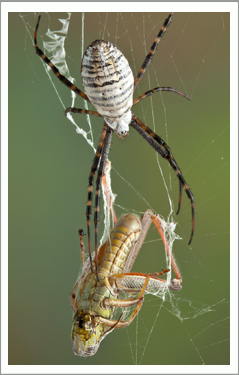 Silk is an incredible material with both flexibility and strength combined. A spider’s silk is not only a sticky trap, but is also both extremely flexible to capture its prey and strong because this viper will not break.  It is very difficult for man to produce both of these properties together. However, the spider amazes us with this combination of its spinnerets and its stomach glands that produce protein bonds in the form of silk so strong that if woven the size of a rope, it would be flexible and yet stronger than a steel pipe. If this rope of silk was made the size of a garden hose in strength, it could support the weight of two full Boeing 737 airplanes. It is also said to be ten times stronger than Kevlar.

This amazing material comes from a spider’s spinnerets located underneath the spider’s abdomen. The number of spinnerets varies among spiders, but the most common number is six. These spinnerets form a highly complex manufacturing system on a microscopic level that produces silk on-demand. It's even more complicated when you consider the proteins making up the silk to provide different kinds for special purposes. There are 40 thousand species of spider and each spider produces several different kinds of unique silk, creating a huge array of silk proteins as unique markers for the webs they spin.

To add to the complexity of producing so many different kinds of silk, the properties of the silk are also remarkable. The production of the different kinds of silk not only involves their spinnerets but is also found in the tiny glands of its stomach. Those who have walked through a spider’s web have experienced its stickiness. It is difficult to get it off our skin, hair, and clothes. It is waterproof and works better when wet with its prime purpose to stop its prey in its tracks. One can easily conclude a high order of complexity.  This demonstrates that spiders have astonishing skills to produce a product that man only wishes it could produce with its factories.

The big question is, where did this detailed complexity originate? Evolutionists get confused in the details. They move to the realm of supposition, which is based on their ideas, not on the supernatural intelligent designer. God has created the living world, with spiders included, to show His glory. He wants us to study His creation as we study His Word so that we can see Him manifested everywhere, even in the lowly creatures that we say are scary or ugly. They can teach us so much.